Reading the Future in a Grand Tableau 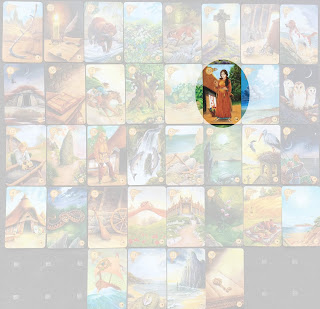 Some people suggest that everything in a Grand Tableau represents the current situation, and where things are moving to over the "reasonable" timeframe you set for such a reading (say 3-6 months).  This is generally my favourite way of approaching a Grand Tableau, given that my readings aim more at empowerment than at fortune telling.

Another very traditional approach that I learned when I was first starting out with Lenormand was that all the columns "in front" of the person card represent the future.  Equally, all the columns "behind" them would then represent the past.  Most often, in front is seen as reading to the right.  However, because some of the people cards face different directions, many readers will choose the direction the Lady/Woman or Lord/Man is facing to define what counts as "in front".  For example, in the image below I have left clear the columns that are "in front" of the Woman. 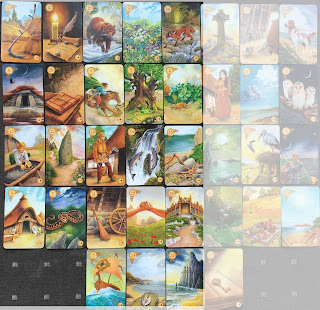 For the Man, though, his future would be all the cards in the clear here: 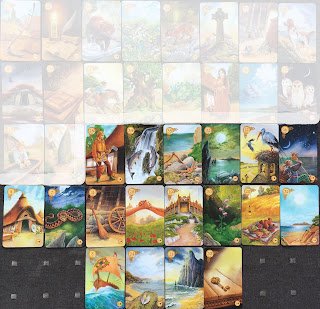 Obviously, these different approaches can give quite different results!  For example, in the GT shown next, applying the "traditional approach" would give an equal distribution of past and future to read for the Lady.  On the other hand, applying the second approach would give an almost entirely past-oriented reading, with only the final four cards as her future... 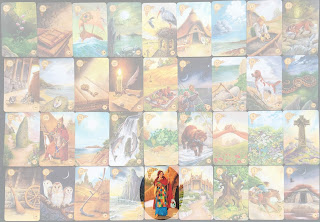 As with any technique, it may be useful in some readings, not in others.

What reasons can you think of to prefer one approach to the other?  What are the situations in which one might give more useful information than the other?  Or is it just a case of doing what you were first taught...
Posted by Inner Whispers at 15:00