Following on from the Learn Lenormand training going up online, I've had some questions about knighting and other 'advanced' techniques.  This week, I give thanks to a client for permission to demonstrate a couple of techniques used in her reading.  I won't go into the whole reading, just wanting to flag up a couple of ways of getting extra information from the cards.  We threw a GT, and the result is shown below: 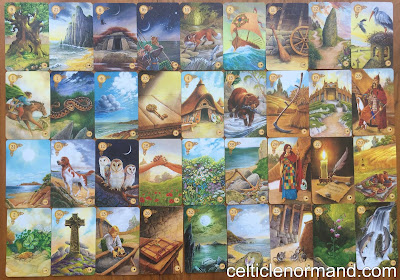 
One of the things that the client wanted to look at was the question of underlying motives, her own for the most part.  The knighting cards can give information on this, and were quite enlightening.

For one thing, the Lord and Lady cards knight to one another.  Part of the reading was looking at her new relationship with a man she has known for decades.  I suggested she might have had her eye on this man for quite some time, and she agreed that she had always thought him attractive, though while she was married it hadn't been a consideration (she was widowed fairly recently).

The other cards the Lady knights to are: the Ship, the House, the Moon, the Fish, the Lord and the Paths.

The Ship and the Paths on the same row suggests she is being motivated by a choice she has to make regarding a new venture, and that there may be some nostalgia involved in that decision.  This is the case, as she is deciding whether or not to go ahead with a big project she and her husband had talked about a lot before he died.  Between the Lord and the Lady, the Scythe and the Hill Fort (Tower) suggest the need to cut institutional ties.  This is something that has been making their relationship more difficult - they both work for big public institutions in their local area.  She has been considering resigning.  The cards point out that not only does the job get in the way of her relationship, but that she also has this other venture that she hasn't yet spoken about, but feels quite passionate about.  Recognising this was helpful for her.

The House and the Lord point to some concerns over how her family will look on this new relationship (she has grown kids).  That matches the fact that she has been trying to figure out how to tell them about it (they live quite far away).  The Letter and the Meadow (Garden) next to the Lady (and between her and the Lord) suggest that writing a letter to "go public" with the relationship might work well.

The Moon and the Fish made me ask if she has a particular reputation with money.  She seemed uncertain about this, but said she had married into money.  She is unsure what her new partner thinks of this, and it does worry her somewhat.  She is also personally worried, because if she remarries it may affect her pension, and if she is to retire from work that will affect her finances too (Mice are in the House of Fish).

Some people prefer the 8x4+4 layout of the Grand Tableau, and one reason for that is the 'destiny line' at the bottom.  However, another way to get a final message is to count around the GT, taking every seventh card, starting from the card before the subject you're interested in.  We did this, starting from the card just before the Lady herself.  The line that came up is shown here:


The client agreed that she has been stressed about keeping her intention to retire a secret, and about not knowing precisely where she stands with this new man and how her family will respond to the relationship.

She said that writing a letter to invite her kids over to actually meet him (looking back at the Meadow, which can also represent hospitality), and telling them then might work well.  They might be surprised by the invitation, but she felt that would be better than the shock of spilling all over such an impersonal medium.

She also said that she definitely wants to leave her institutional job, to do something that feels more creative.  She wondered whether she could do something creative or organise an event as part of her goodbye.


Next week's post will also be on reading Grand Tableaux.  It will be out on Sunday, 1st May, as part of the Tarot Blog Hop.
Posted by Inner Whispers at 15:00