While it's a truism that love is the most asked about subject in readings, it's less common to have a man come requesting a love reading.  It makes a nice change, and I was grateful to receive permission to share this, with name's changed.

Keith explained that Tonya works in law enforcement, and travels a lot.  She is not very expressive, and although their relationship has become physical and they get along well, he isn't quite sure where he stands with her.  On top of that, his work as a salesman also requires him to travel, and sometimes seems a bit "sneaky" to Tonya, though he said "it's all above board".

We agreed to throw a GT, pictured below: 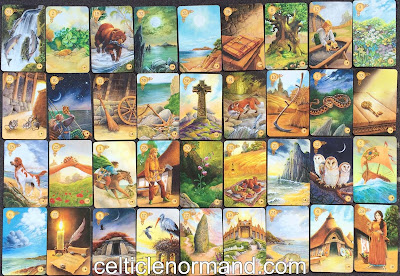 Below and diagonally behind him is the Burial Mound (Coffin), I ask if he has made a big change, recently, perhaps around how he sees things (Clouds at the start of that row, followed by Letter and Coffin, turning over a new leaf around some kind of uncertainty, seeing the writing on the wall).  He says he has long suffered from claustrophobia, but recently did some CBT-type exposure therapy, and explains that Tonya was a motivator for him to do so.  The consequence here: Cross and Book - a life lesson about secrets?  He laughs and says that Tonya guessed about his claustrophobia based on how he had reacted to her coming in to join him in the shower, that he had been trying to keep the issue a secret, but realised that it was only by talking about it that he could get help.

On the diagonals behind him we see the Clover and the Whips - there have been some small arguments between them.  The consequence (forward diagonal), a need for a choice (Paths).  When I ask about that, he says "work".  That fits nicely with what is on his mind (above his head): the Whips, the Anchor and the Cross, so I ask him about his work.  It is somewhat repetitive, and he has been feeling a bit bored by it.  The fact that it's an obstacle between him and Tonya is also a concern.  While he doesn't feel wedded to his work, he worries that she does, and isn't sure how they can reconcile their jobs.

In terms of the cards linking him and Tonya (the Woman), there is the Ship and the Storks (at the two points where their lines and columns intersect).  A change of career would be a big move for either/both of them, and yet the travel issue, meaning they don't get to see one another often, is really bothering him.

Reading the line backward from the Woman, her current sense of security, feeling at home in her job (House), is being challenged by her emotions (Heart).  She is very institutionalised (Hill Fort/Tower) as part of law enforcement, and yet Paths touches both the Hill Fort and the Man, and is followed by Storks - there is a potential for change there.  However, it would be a big ending for her (Burial Mound), there might be contractual issues (Letter) and it would leave her feeling very uncertain (Clouds).  Yet, looking at the column above her, the Key to her soul's journey (Ship) is around creativity (Flowers).  Does she feel creative where she currently is?  He is unsure.

As for the line moving forward from his significator, I list keywords as peace (Lily), community (Meadow/Garden - directly over the Hill Fort on the Woman's line), obstacle (Mountain), communication or gossip (Owls) and travel or soul's journey (Ship).  Her institutional group is a very tight knit one, that blocks him out and gossips about him.  He feels like an outsider (another word for foreigner, in some languages, connecting it to the Ship).  However, looking at his column, his work reputation (Moon/Anchor), is something he can change (Storks underneath him/his control).  The question being, what kind of change does he want?

From this, we move onto designing a spell/intention for him.  Keith says that, whether things between him and Tonya work out or not, he thinks he's ready for a change at work.  And certainly, making that kind of change is also a first step to working things out so they can see one another more.  So, he wants to gain insight into what else he could do, and open up to possibilities for change.  I suggest the cards: Sun, Clover, Key.  He says he also likes the Storks, and wants the Anchor to remind him what it's about.  Final spell:

If you are interested in having this kind of session with me - an interactive conversation with the cards, working towards a spell to keep your intention clearly in mind - hit the Paypal button below, or email me at info@innerwhispers.co.uk.  Session cost is £55 for an hour, or £75 for an hour and a half (good if you have a more complex situation you want to work on).  I offer concessions for students, pensioners, single parents, and anyone on benefits, as well as Canadians ;)  Please feel free to email me and ask if you'd like a discounted session - I'm always willing to make things work.