Last year, I posted about a way of using Lenormand cards for a yes-no reading, based on the playing card associations.  At the time, I was "lucky" enough to get consistent answers.  Now, six months on, I asked the same questions again. 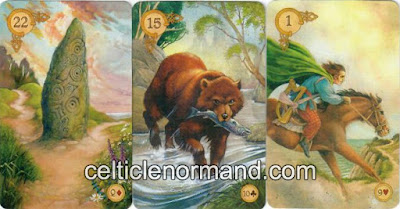 
In terms of yes-no, we have a strong yes (Heart), a weak yes (Diamond) and a strong no (Club).  So, yes to giving up, but with some reservations.

Looking at the card meanings, choices necesitate getting a move-on with your resources.  Or, choices should be made on the basis of strong information.  Or, resourceful choices send out a strong message.

Bringing those together, giving up would open the possibility to move forward strongly in a different direction.  Such a choice should be made on the basis of gathering good information.  It would be a choice to use resources in a better way, and would help to send out a strong message. 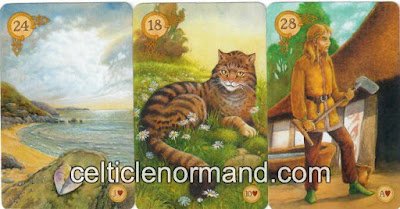 
Three Hearts, that's a big, fat YES!  So, a weak yes to giving up, and a strong yes to carrying on.

The Cat is an interesting card.  The Dog is pure loyalty, whereas the Cat is both loyal and independent.  Some people see that as an oxymoron, but to me it makes a lot of sense.  If anything, the Cat's loyalty is worth more, because it is given less easily.  Once given, though, it is offered in a way that doesn't pander, but supports.  Sitting in the middle, it speaks of carrying on for the right reasons, rather than the wrong reasons.  And of finding these through balancing emotions and logic.  If I carry on, I need to do so in a way that suits me, not just because I feel I should or to do what others tell me I should be doing.


As for the larger question around yes-no readings, if I had done only the first of these readings, I would have a very different perspective than if I'd just done the second.  Which says a lot about the value of yes-no readings!

How you ask the question affects the answer you get.  As with the Law of Attraction, where you put your energy influences what comes to you.  And I could also have asked something like: should I put my energy into Y (something different)?  Which would have given me a whole other set of variables to think about, even though indirectly it would be examining the same question of where my energy should be spent right now...
Posted by Inner Whispers at 15:00