What Time Is Love? 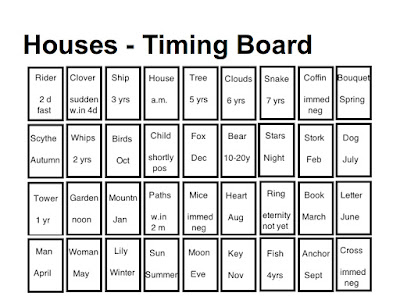 Okay, borrowing shamelessly from musical lyrics for the title, but today's post is all about timing.  And just as KLF's What Time Is Love? may now seem very dated, I find the most traditional Lenormand timing systems to be pretty irrelevant to how I read.

Here is an image of a traditional approach to finding the timing of a reading.  The idea with the Lenormand timing board is that after you have completed a Grand Tableau reading, you scoop up and re-shuffle the cards, and then lay them out in this pattern (basically the GT again, but with a timing focus).  Where a particular card falls that was most relevant to your reading (for example the Heart for finding love), tells you the timing of that event foreseen in the Grand Tableau.

Imagine, then, that you've just read a GT, and it suggested that the person's perfect partner is out there, a studious, red-haired man (framed by the Book and the Fox).  You then deal the timing board, and find the Heart on the House of the Snake - 7 years until this event is set to take place!  Now, I don't know about you, but if I received a reading and was told that I'd think, what was the point of that whole reading?!  Worse yet, it could land on the House of the Bear: not destined to happen for 10 to 20 years!!!

On top of that, there's the question of memorising these mostly random seeming timings.  The Rider and Clover being fast, and the Scythe being sudden, make sense, as does the night for Stars and the Sun for summer.  But why should the Heart be August and the Key November, with the Whips being two years and the Fish being four years? 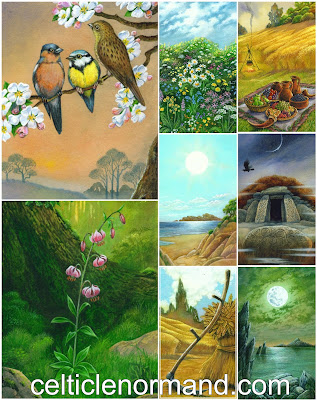 In designing the Celtic Lenormand, I thought about timings that would make sense within a time frame of a maximum of a year (the most I would consider it useful to read ahead).  I've written many times before about the cards associated with the Wheel of the Year sabats - shown in order from Imbolc here.

Another aspect I included in these images was the idea of the time of day - relevant for when to perform a ritual or spell, for instance.  So, the Songbirds can represent Imbolc (February Eve), and also the pre-dawn twilight.  The Lily represents Ostara (Easter, Spring Equinox) and also early morning, while Beltane (May Eve) and mid-morning are shown in the Flowers.  Litha and noon are indicated by the Sun, and early afternoon and Lughnasadh (August Eve) are the Scythe.  The Autumn Equinox and late afternoon are found in the Meadow (Garden), and nightfall and Samhain are found in the Burial Mound (Coffin).  Finally, Yule is represented by the Moon and midnight.

Alternately, a system which makes sense to me both in terms of time frame and in terms of practicality, is to see the cards 1-31 as potentially representing the day of the month when something is to happen.  Likewise, the cards 1-12 can represent the months of the year.  A little trickier is the fact that readers also associate the cards with hours, days, and weeks.  So, the Tree represents something that is quite long-lasting (in terms of its main interpretation).  Yet, it could also indicate 5 hours, 5 days, 5 weeks, 5 months, or the fifth month (May).  How do you decide which of those is indicated?

One possibility is that the answer will seem intuitively right.  Another answer may be in how you frame the question at the outset. That is probably the simplest way to get clarity: defining how long you intend to read for before you begin.  And of course you can combine both of these, setting your intended time frame and also accepting the message if something jumps out at you intuitively.

How about you, what timing system/s do you use?
Posted by Inner Whispers at 17:35