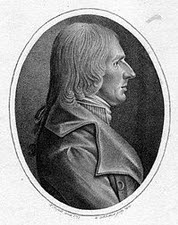 For last year's Samhain Blog Hop, I spoke with Marie Anne Adelaide Lenormand through the cards, using a Grand Tableau.  This year, our blog hop wrangler, Arwen, asked us to commune/communicate with, and commemorate someone from the past.  My thoughts were drawn to the other main person involved in the creation of these 36 cards we know as the Petit Lenormand deck: Johann Kaspar Hechtel (1771-1799).

It was Johann Kaspar Hechtel who expanded on the Coffee Grounds cards, adding extra cards to make the deck up to 36 cards.  He chose some different emblems - for example excluding the Lion and Worms found in the Coffee Grounds cards and adding in the Bear.  And he added in playing card inserts - originally both the French suits (the suits used in most playing cards today) and the less well-known German suits (Hearts, Bells, Acorns and Leaves).

Some writers suggest that he added in the playing card inserts so that the deck could be used for a large number of different games, as well as the board game he originally intended (similar to snakes and ladders, with a gaming pot of cash as the prize).  Certainly, he doesn't seem to have paid any attention to their divinatory meanings, as they do not match the Lenormand emblem interpretations.  Of course, that would have been a big ask, in any case, as different countries, different towns, and different readers, interpreted playing cards differently.

Johann Kaspar Hechtel was a man of science (writing articles on physics), and a business man who enjoyed creating parlour games.  For this communication, I decided to use a more conversational approach, asking questions and drawing three cards as an answer.  For yes-no questions, I'm using the method of looking at the colours of the playing card suits - red for yes and black for no - and then interpreting the cards further.

My first question was: Did you include the playing cards just to make your deck multi-purpose, the only deck anyone would ever need for gaming?

Based on the playing cards, that's a big fat yes (2 hearts and a diamond) :D  Looking deeper, this brought progress (Storks) to completion (Burial Mound), in a lasting way (Holly).  Okay, he's not shy about thinking he did a good job!  Though the two different card inserts are hardly ever included today.  Then again, it's only the Germans who ever read with the German system, and they use the French system equally these days...  And the deck/system he created has held true for over 215 years now!

Second question: Given your original intent to create a gaming deck, how do you feel about these cards being used specifically (and almost exclusively) for divination?

Seems to me that he was a little uncertain about this at the outset (Clouds), but has come to see it for the area of growth and energy it is (Oak, Sun).  If this is what it takes to be an enduring success (Oak, Sun), he's all for it :)

Third question: Do you wish the deck carried your original name?

Two spades and a heart suggest the answer is no, not really.  As to why, the deck has achieved a new, comfortable position (Girl, House) in the public eye (Meadow), which it probably would not have reached without Mademoiselle Lenormand's name.

Lastly, then: What is your hope for the deck's future?

Seems to me that Herr Hechtel would like the deck to reach new (Boy) peaks (Mountain) of renown (Moon)!  And you could say that playing/gaming (Boy) was an obstacle (Mountain) to that fame (Moon).  Hence why he's happy with how it has developed :)

It's interesting to think about how Johann would have responded to this deck, given he died before his first version was even printed (1800), and long before the deck was rebranded in 1849.  Perhaps if he had lived, none of this would have been possible.  In any case, I like to think that he is glad his game has become such an enduring success.

Now, let's hop on round and see who else is joining the conversation this Samhain!