The Differences Between Tarot and Lenormand

Recently, I've seen quite a few people asking what the differences are between Tarot and Lenormand, so this post looks at exactly that.

At a basic level, Tarot has 78 cards organised into four suits (Wands, Cups, Swords and Pentacles or some variation thereof) with fourteen cards each (Ace through Ten and four Court cards), plus 22 Major Arcana or Trumps.

While the Tarot Majors have names (such as the Chariot and the Hermit), every Lenormand card has a title and key object: the Rider, the Clover, the Ship, the House, the Tree, the Clouds, the Snake, and so on. 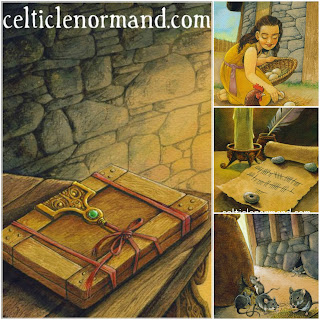 Straight away, you notice that the Lenormand objects are rather everyday, things like the Letter and the Book, the Child and the Mice.  There are a lot of natural objects and animals, as well as some people.  And although you can use the playing card associations to add to your readings, you can just read the cards based on these key objects.

Many Tarot decks have cards showing situations, such as the Five of Cups with a cloaked figure looking sadly at three spilled cups, ignoring two full cups behind him.  They often have detailed landscapes, a bridge and a town in the distance in the Five of Cups, for example.

Lenormand cards tend to be much simpler: a Book lying on a table, a Ship on the sea, some Mice eating something. This simplicity is connected to how Lenormand cards are read.  They are pictographs rather than images, hieroglyphs/words rather than stories told through visuals.

For instance, the Five of Cups is associated with situations where someone is feeling melancholy or not seeing the potential/future because they are focused on what is wrong or past.  A single Tarot card can be a whole answer: you've been looking to the past, what positives might you have been ignoring? 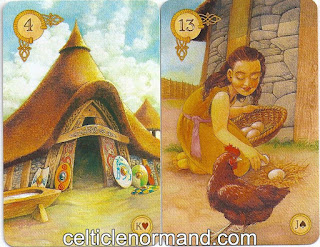 Meanwhile, the House has keywords such as real estate, house, family, patriarch, and comfortable; and the Child has keywords such as new, naive, small, child and innocent.  Lenormand cards are normally read together, combined or blended to make composite words or sentences.  The House and the Child together could represent a new house, a naive father-figure or a small property.


With Tarot cards, some readers look at how they interact.  Is the Queen of Swords looking at the Five of Cups? This could mean showing some empathy to someone who is sad and stuck in the past.  Other readers pay attention to which details of a card jump out at them in a given reading.  Do you notice the tassel on the Queen of Swords' arm?  That might mean tempering your actions with kindness.

This interaction between cards is far more pronounced within the  Lenormand system.  Not in terms of the actual images, though there are some that have a directional element, and some readers will consider which way the people cards or the Court cards (if they have illustrated inserts) are facing.  More often, it is about how near cards are to one another, or how far apart.  Even if you read more with combinations than with the near and far approach, the distance determines which cards you combine together.

Another way of deepening your Tarot readings is through using associations to numerology, Kabbalah, astrology, mythology, etc.  None of these is traditionally used with Lenormand cards, which are not seen as part of any esoteric tradition, but as something far simpler and more everyday.

On the other hand, Lenormand cards do still have different levels of interpretation.  They can be interpreted at a symbolic level: the House standing for comfort or family.  They have a literal level: the house as an actual house, or real estate more generally.  They have a cartomantic level: the House is the King of Hearts, a kindly older man.  They have a person aspect: the Rider is a lover, a young/er man, a visitor, the Ship suggests someone foreign.  They have a timing aspect: the Rider is fast - the next three days.  They have health associations: the Fox points to an issue with ear, nose, throat or sinuses.  And if you are reading with the Celtic Lenormand, then you know they can also have a spiritual dimension... 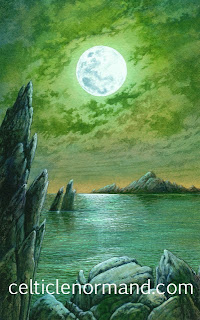 As for reading intuitively, some people claim this is a difference between Tarot cards (read intuitively) and Lenormand cards (not).  However, as I've written about before, this is a false dichotomy.  If a reader is to be anything other than a computer, they will always bring their intuition into what they do.

In reading Lenormand cards, your intuition guides you to choose the correct level of interpretation for each card, and to find the combinations that are meaningful based on the question and the context around the reading and the client.  Although this isn't connected with the actual visual on the card you are looking at, it is still a sorting process that goes on in your subconscious, which can examine and choose the most relevant meaning or image to you and serve it up in a way that your rational mind takes far longer to understand.  Those "aha" moments of intuition happen just the same in a Lenormand reading, it's simply that what your subconscious is processing is the keywords, rather than the visual cues.

I hope this post has been useful and please do ask if you have any specific questions.  And check out my most recent video, which looks at these differences in "intuitive reading" and offers an exercise to build your Lenormand intuition!
Posted by Inner Whispers at 15:00