A few years back, Melissa Hill, the creator of several lovely self-published Lenormand's (the Melissa Lenormand and the Postmark Lenormand), posted a hilarious YouTube video.  Titled "Shit Lenormand Readers Say", it's a great spoof of some of the rigid thinking that sometimes comes into the Lenormand community.  The one she says most often is "But Lenormand cards aren't read intuitively!"

I was reminded of this video by a few posts on Instagram recently.  Seems like this dead duck refuses to stop quacking.  So, I wanted to post a bit about it.

It is totally true that Lenormand cards aren't traditionally read in the same intuitive style as many people use for tarot.  The intention is not that you see a cute-looking Mouse card and think the Mice are telling you something small and cute is coming your way.  Rather, the cards act like pictographs: they spark keywords.  Mice, for instance, is associated with theft, pollution, tainting, undermining, eroding.  However, once you have those keywords, then you should absolutely let your intuition come into play!

Below is a little brainstorm linking three cards I drew at random from the Celtic Lenormand, asking what I should be aware of at this time: the Chickens (Birds), the Cat (Dog), and the Hill Fort (Tower). 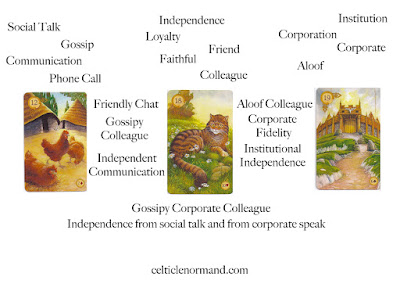 Which combinations of keywords you use, and how you put them together, is where the intuition comes in.  Should they all be melded together, or is there a sentence in there?  Is mirroring important?  Is the first card the key, and the other two follow together, or do you work from the centre out, or do the first two lead to the last?  Or a combination of these?

If I worked in a business environment, perhaps the first interpretation might have been useful.  That's not the case, and so, still staying with the keywords, I came to the second: Independence from social talk and from corporate speak.  In this, I was also mirroring the Chickens with the Hill Fort, to give me corporate speak.  Having just given my first session as a magical life coach, this made a lot of sense to me.  There is a fine line to tread between being just plain chatty and going off into institutional jargon.

I hope this example helps to clarify where the intuition is in a traditional Lenormand reading :)