Sometimes, the borderline between a spell and a reading is a little fuzzy, and this is a good thing.  One of the great joys in doing Lenormand spells is that you can also "read" the spread you create, and this may give added insight into the situation you were doing the spell for.

Another of the benefits of the Lenormand system for this kind of combined spell/reading is the fact that the cards have playing card associations as well as Lenormand numbers/objects.  This can be particularly helpful when it comes to creating a spell or doing a reading on a situation with a number of people involved. 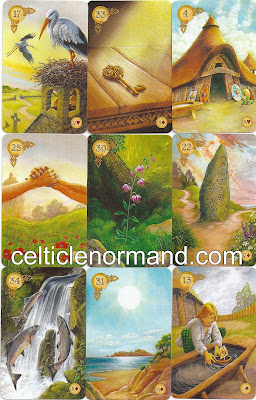 For example, this is a spell that was created to help a young couple who had recently moved house, and had an issue with their neighbours.  The Storks are associated with the Queen of Hearts, and the Child with the Jack of Spades.  The young couple were someone who works in the caring professions, and someone who is quite forthright and open, acting with a good will, but not always with tact.  As for the neighbours, these were two older men, an architect (House - King of Hearts), and a business man (Fish - King of Diamonds).

At the centre of the spell, we placed the Lily.  While also associated with the King of Spades, the Lenormand keywords of harmony and peace were the reasons behind the choice here.  For the "action" part of the cross, we placed the Key for problem-solving, the Ring for commitment, the Paths for good choices, and the Sun for success.  Overall, this emphasised the couple's wish for problem-solving through a commitment to harmonious choices to bring success to the situation between these four people.

Once the spell was in place, reading the triplets of the lines offered some extra help.

Storks, Key, House: home renovations are key to the situation.  Ring, Lily, Paths: a commitment to this new section of their life's path requires approaching it with pure intentions.  Fish, Sun, Child: shining an open light on money matters will help.

The couple agreed that some of the issues were around renovations that were being carried out on communal parts.  They hoped that demonstrating that they had acted in good faith, and agreeing to the older men's requests for transparency, were both probably helpful strategies in coming to an understanding with them.

Hopefully, this shows the way the cards can be used to create a spell which helped the couple prepare to negotiate with their neighbours.  It expressed their desire for harmony, and also gave them some suggestions on how to best go about achieving it at a practical level, too.
Posted by Inner Whispers at 15:00