What Seeds Do 'Negative' Cards Hold? 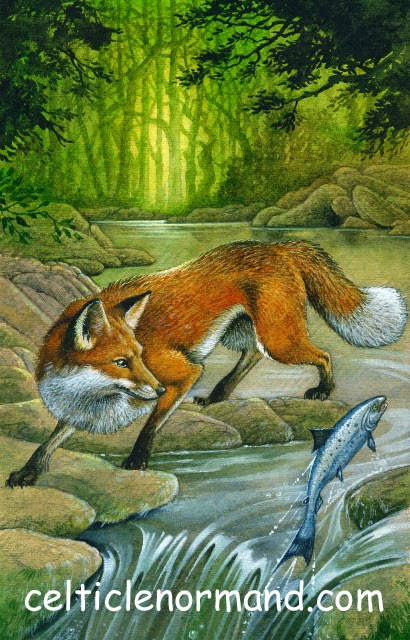 In Lenormand, just as in Tarot, there are cards people would often prefer not to see in their reading, or at least not close to their significator.  Which cards these are depends a little on which tradition they follow.  In some, the Snake is seen as a negative card, while in the German tradition it generally just indicates a woman, without that being a bad thing.

Still, whichever system you follow, there are some cards that are not often welcomed in a reading.  And yet, I believe every card holds the seed of an answer within it.  In the Celtic Lenormand companion book, I tried to draw these out, finding the light and dark within each card.

For instance, many readers see the Fox as being duplicitous, and someone to watch for.  Yet, it can also suggest trusting your intuition, in the sense of 'following your nose'.  And it can point to street smarts or a useful skill set.  These might be aspects that will help if there is someone treacherous about. In a similar way, the Birch Rods can indicate arguments or even abuse.  When raised in anger, they make a fearsome weapon.  Equally, though, if they repeatedly strike a dirty carpet, or are wielded as a broom, they can clear away negativity.  So, the seed of a solution to disagreements might be found in clearing the air.  And if that doesn't work, perhaps a clean sweep is in order, removing that person from your life.

Another interesting aspect of the Lenormand system is that, since cards are read together, 'bad' cards can cancel one another out.  The Mice might, for example, nibble away at the obstacles represented by the Mountain.  Or the Scythe might cut restrictive bonds, ending an unwelcome contract, indicated by the Ring (not inherently a 'distasteful' card).

In these approaches, my intention isn't to deny that there are liars in the world, or obstacles or arguments.  It's simply to suggest what we can do when confronted with these situations.  And in my experience, the seed to the answer is so often in the issue itself...