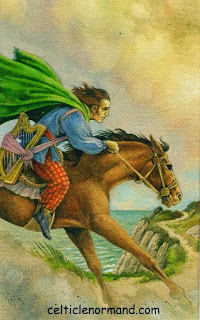 I was asked recently about reading around career choices, and thought it worth a few specific posts.  While some cards have very obvious messages around work, if that is the question, others may be more subtle or challenging.  So, I'll go through all the cards with some suggestions on what careers they might point to, and what strengths they suggest in terms of job skills.

As someone with the gift of the gab, I see the Rider as being a good card for any job that requires face-to-face people skills.  That could cover anything from selling in a market to anchoring a TV show (perhaps paired with the Stars), certainly passing through any sales role (maybe paired with the Fish)!  Journalism is also definitely in his purview, especially if paired with the Letter.

The Rider also speaks to movement, both in terms of location, and in terms of exercise.  So, this could be a travelling sales rep (especially with the Ship), or a fitness coach or trainer.  The Rider tends to be well-turned out, and skilled in the use of language/s, as well as quick off the mark.  This is someone who sets things in motion, so could also be a motivational speaker, especially if paired with the Birds. 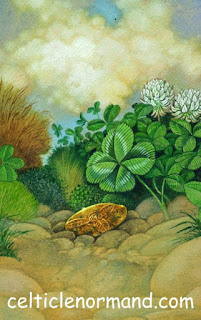 As a card of luck, the Clover could suggest a career in gambling!  Well, more in the line of croupier or betting shop assistant, rather than as a gambler ;)  It indicates things that are quickly over, so could also point to working as a temp.  As an indicator of something small, if paired with the Ship it might suggest a small business venture.

In terms of skills, the Clover suggests optimism, and someone who is able to seize opportunities when they present themselves.  Another positive is the ability to pay attention to the fine detail, and to stay in the moment.

As a card that is used for any kind of motorised transport, the Ship could also point to careers in the travel or tourism industry, including taxi driver and pilot.  Paired with the Flowers, it might be a model who travels for photo-shoots, or a world-renowned interior designer.

Skills here include tolerance and a broad perspective (unavoidable if you have contact with different cultures), as well as an ability to think globally.  A willingness and enjoyment of travel would certainly make business trips more pleasant, for anyone in a business role that requires them.  Perhaps, too, an ability to understand people's hopes and dreams... 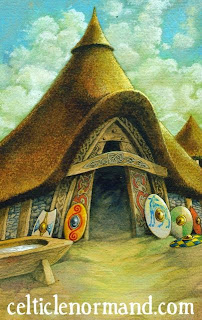 As a symbol of property, obvious choices here would include realtor, but also property manager.  If paired with the Clover, you might find housesitting for brief stints to be an enjoyable and lucrative thing to do.  Taking the literal image of the home, a job working from home might appeal.  Using the internet to support that might be seen in a pairing with the Stars.  If paired with the Garden, it may be that you could work in some kind of half-way housing, as a house mother or father.  This card can also be seen as being in the building trade - a brickie, plumber (with the Snake), electrician (with the Stars), Architect (with the Letter).

It can also suggest hobby-jobs you do from home in your spare time, that may bring in some pocket money.  In terms of career, it speaks of stability and happiness.  In terms of skills, we see someone who is handy about the house, who is dependable, but who may be a little pedantic or narrow minded.

The Tree is an indicator of health, and so depending on what it is combined with it suggests different healing modalities.  For instance, with the Sun we have energetic healing, such as Reiki, or more traditionally perhaps an X-Ray technician.  Likewise, with the Birds we might see an ultrasound technician, or someone using healing sounds such as Tibetan bowls.  Seeing the Songbirds, associated with healing talk, we might also think about counseling, especially in a three with the Heart for emotion.

The Whips with the Tree could advise some kind of cleansing or detoxification process: someone who administers enemas?  In terms of repetitive actions for health, this could also be a physiotherapist, or in a three with the House, perhaps an occupational therapist.

The Tree also speaks to ancestral or long lasting things, so it could be taken as carrying on the family business, especially if paired with the House or the Boat.  Paired with the Tower, we might see an institutional 'job for life'.  In terms of skills, the Tree points to perseverance. 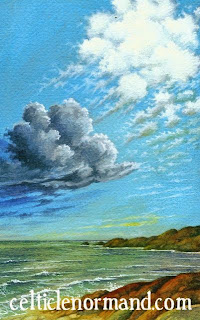 The uncertainty and lack of clarity of the Clouds could suggest anything from a lighthouse keeper (perhaps paired with the Sun), to a weather forecaster.  Paired with the Rider, we have uncertain messages, maybe a code breaker.  Combined with the Clover and the Boat, small, insecure business ventures might suggest someone with a start-up in an uncertain market.

As for skills, being able to cope with ambiguity shouldn't be underestimated.  Many people find it difficult to live with a lack of clarity, and may make precipitous decisions just to have certainty.  However, with things like stock market investments and the currency markets, being able to tolerate the insecurity can be a big advantage
Posted by Inner Whispers at 11:00