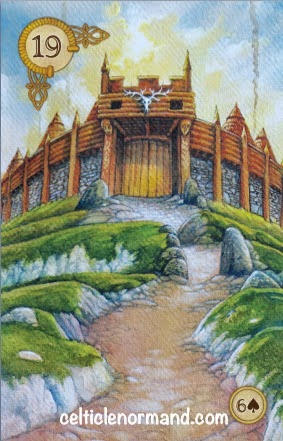 On Monday, I heard from US Games.  They sent me through card images to okay, as they have now finished designing the card layout and elements.  There were a few tweaks needed, which should be fairly quick to do.  And while they have completed editing the companion book, they still have to finalise the packaging and card backs (will update here when I hear about those).  Overall, things are definitely getting closer, though there is still no official publication date.

One great bit of news is that the cards will be borderless!  I think their designers have done a wonderful job translating my idea of golden torques to hold the Lenormand numbering.  What do you think?
Posted by Inner Whispers at 12:00 12 comments:

Uniting Opposites: The Making of the Flowers 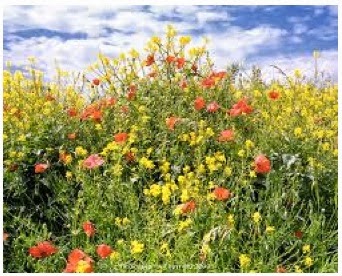 For this round of the Tarot Blog Hop, we were invited to write about the union of opposites.  The first thing I thought of was how the very urban, eighteenth century divination system of Lenormand cards is combined in the Celtic Lenormand with both a rural aesthetic and a modern pagan perspective.  Some may find this a strange union, while others will hopefully feel it brings something new to each.

Certainly, as Ronald Hutton indicates in his book Triumph of the Moon, historically these elements are strongly interlinked.  Modern paganism grew from the urbanisation of Europe, and Britain in particular.  And a large part of its draw is precisely because of the way that urban life distances us from, and allows us to romanticise, nature and the countryside.  In a similar way, we also romanticise the past, for example the glamour of eighteenth century France! 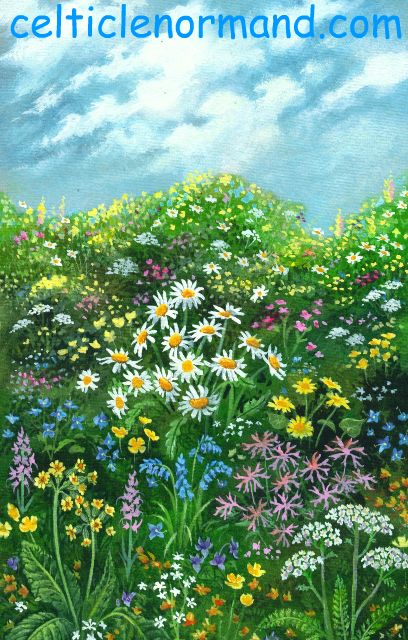 This combining of urban and rural was also a factor in the creation of the Flowers, the card that in this deck represents Beltane, this spoke on the Wheel of the Year.   I am a thorough urbanite, and when designing the card chose spring flowers based on colours I thought would work well together (inspired by the photo above).  I wanted to represent the idea of the gift of spring blooming, and an invitation to enjoy the budding wonder of nature, notions that play into the Lenormand meanings of this card - beauty, creativity, a gift, an invitation.

Fortunately, though, Will Worthington acted as more than simply an artist in the creation of this deck, instead being a true partner.  Will is a keen gardener, living far closer to nature than I do, and having created a garden that visitors flock to admire every year.  He queried my flower choices, telling me that they wouldn't all be in bloom at the same time.  And when I told him that these should be flowers blooming at Beltane, he came up with suggestions of more appropriate choices, and then brought them beautifully to life!