The Making of: The Anchor 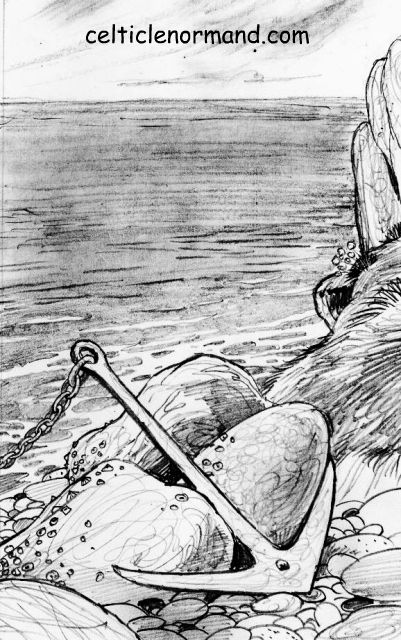 A few weeks back, I posted a brief reading which included the Anchor card.  It made me realise this is one of the cards I haven't talked about much yet.  Time to remedy that!

This is a fairly traditional depiction of the Anchor.  Probably the two things that distinguish it from others are firstly that this is an iron anchor, rather than being made of the more modern steel.  Secondly, I think Will has done a beautiful job adding in small details to this beach scene - barnacles and the like - to bring it to life.

Anchors of one sort or another have been in use, as far as we can tell, at least since the Bronze Age, when they were generally big stones on a rope or in a basket.  In the Iron Age, welded iron started to be used.  This was much less robust than modern anchors, which are cast, because the welds didn't necessarily hold very well.  Also, as in this image, the "teeth" of the anchors were generally straight, rather than rounded and with catching tips as is the case with modern anchors.  So, the anchors sometimes broke, with the teeth snapping off, or the whole thing coming apart.  Still, they were better than not having an anchor, and commonly used from early Roman times on.

In the Lenormand system, the Anchor is sometimes considered a "work" card.  I like that definition.  After all, your job is something that provides a certain stability in your life.  Yet, you can still up anchor and change, if you want.  And without an anchor or a job, you float free, which can be a good or a bad thing depending on the situation.  Some people also see the Anchor as representing married life, along the lines of "the old ball and chain".  If asking about a holiday, it might suggest a beach holiday, or somewhere by the sea (while the Ship would suggest actual movement, such as a cruise).

I love the still waters that Will painted, and the sweet little flowers growing above the anchor, as well as the colourful pebbles on the beach.  Finding work, or a sense of groundedness, that includes points of interest, calm, and emotional satisfaction, are all good things.
Posted by Inner Whispers at 10:30

Email ThisBlogThis!Share to TwitterShare to FacebookShare to Pinterest
Labels: Anchor, the making of