Mabon Blog Hop: The Making of the Meadow

Welcome to another Tarot Blog Hop!  You may have hopped forward from Tarot Trends, or back from Pure Blessed Tarot, depending on which way round you like to go.  Or maybe you found your way here from the Celtic Lenormand Facebook page, or somehow else.  Whatever the case, I hope you'll make your way round the hop, there are sure to be plenty of interesting posts!  And if you get lost along the way, here's the Master List.

For this hop, our wrangler, Christiana Gaudet, invited us to look at myth as it connects to the cards.  What I'd like to offer is a look at the card that I chose to represent this spoke on the Wheel of the Year in the Celtic Lenormand, and the myths that might be associated with it.

In traditional decks, this card would be the Garden.  While there is much evidence of the Celts being involved in agriculture, there is little evidence of them having gardens.  And those they did have were more of the kitchen-garden variety.  Whereas the Lenormand garden was originally based on the Parisian (or generally city) practice of going for a walk or ride in the local gardens to see and be seen.  It is connected with socialising, events, and hospitality, as well as our public persona.

To represent that idea, I decided to rename the card Meadow, and show a space prepared for the gathering of a village or tribe to celebrate the Mabon harvest, focused more on fruits than on wheat, though that is present, too.  Of course, one myth we see here is that of celebrating Mabon. 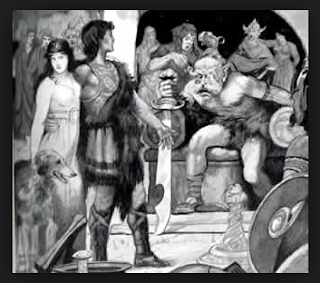 There is plenty of discussion as to whether or not people in the past actually celebrated any or all of the 'pagan' festivals which are highlighted today.   And strangely, the myths associated with Mabon refer to Beltaine as the time of his birth and to the Winter Solstice as the time of his rescue from imprisonment by King Arthur's knights.

The naming of the second harvest for Mabon is probably a later pagan association, connecting with the idea of the cyclical battle between the Summer and Winter Gods.  The young Son/God defeats the old to win a wife and continue the cycle of life, bringing fruitfulness to the earth.  The time when Mabon is imprisoned could be associated with the harvest and the storing up of those fruits over the winter. 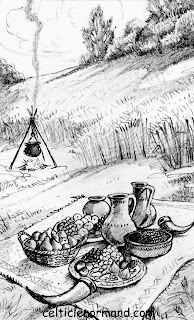 Yet, even if Mabon is a name only later associated with the time of harvest, there is clear evidence of harvest festivals from the past.  Though they may not have fallen on this exact date, the fact of giving thanks for the fruits of the season would have been a common occurrence.  And gathering to celebrate that as a village or tribe would have been one of the times when groups came together, seeing friends old and new, telling tales of the trials of the year, and generally socialising and putting on a public face.  So, though not exactly a Garden, the Meadow fits the spirit of the Lenormand card, and the spirit of this turn of the Wheel.

Now, for more myths and cards, please hop on over to Pure Blessed Tarot.
Posted by Inner Whispers at 14:30

Email ThisBlogThis!Share to TwitterShare to FacebookShare to Pinterest
Labels: Meadow, Tarot Blog Hop, the making of