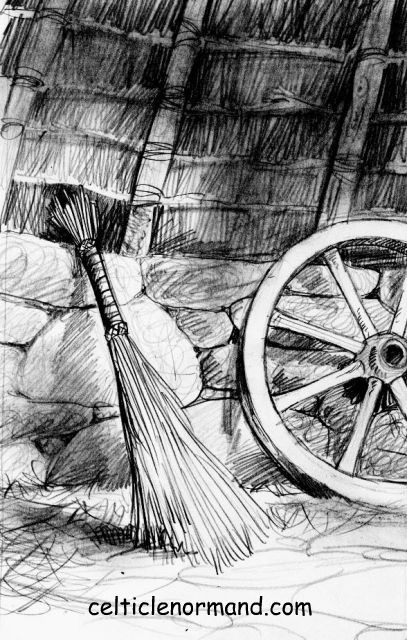 This card is sometimes called Whip or Whips, occasionally Broom, and other times Rod or Birch.  I decided to go with Birch, as it has the connotations of Whip - in England you can still use birch as a verb - but with a bit more openness to its meaning.

When I was researching this deck, I could find no evidence of early Celts using whips.  There are Roman depictions of men with whips aplenty, but nothing of the sort on Celtic pottery or other art.  There are plenty of spears, tools of war, but not whips, which are more about punishment.  Of course, this isn't enough evidence in itself that the Celts didn't beat their own people, but it was enough for me not to want to limit this card.

Birch twigs can also be used as a broom, which fits nicely with pagan ideas about making a clean sweep.  And fitting in with possible interpretations of the Lenormand Birch card, we often need that cleansing precisely because of arguments and strife.  Both as a broom and a whip, the symbol suggests repetitive actions, another interpretation of the card.  The wheel in the background reminds us of the Wheel of the Year, and the fact that time moves on and life changes.  While there may be unpleasantness now, that too will change.
Posted by Inner Whispers at 12:00